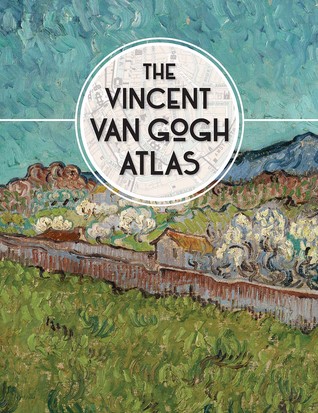 This impeccably and thoroughly researched atlas-biography hybrid is easily the best comprehensive work I've read on Vincent van Gogh. The focus isn't the cliché of the unstable, depressed artist who cut off his ear. On the contrary, it portrays him as what he was: an eccentric, misunderstood and sensitive man who never found his place in the world because he was happy being a citizen of Europe; it even feels like a travelogue.
I very much enjoyed the originality of including an illustrative timeline at the beginning to indicate not only the pages and years, but also places, houses and his age. It included small reproductions of his self-portraits according to when he painted them, as well as illustrations to show how his residences looked throughout his life.
Adding to that travelogue feel, at the start of each chapter there is a map of the place where he was living, coupled with memorabilia of that period in the form of a collage. Currencies, correspondence, photographies and schedules are some of the items included.
Another thing I always love finding in a book -especially if I'm reading a biography- is a family tree, so I was very pleased to find one here. I've read many biographies on van Gogh, but I'd never realized that the sons died fairly young (in their thirties), while the daughters were considerably longevous (died in their seventies or older) until I saw them next to each other in this tree.
Needless to say, his whole work is included in this work, including some of the sketches present in the letters he sent to Theo over the years.
The only thing I would criticize is the fact that at some point it is mentioned that Vincent sent Theo a list of over sixty of his current favorite artists (there even is an illegible photo included) but the artists in question are not specified. Nevertheless, that doesn't take from the fact that this is one of my favorite reads of the year.

Edition: ebook (provided by Netgalley in exchange for an honest review)
Expected Publication; 11/15/2016