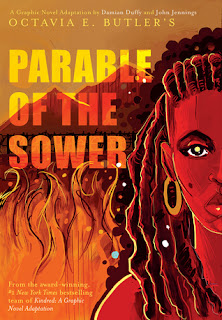 I was expecting something less unfinished.

Last year I reviewed on Goodreads Duffy's adaptation of Kindred and, although I hadn't read the original book that graphic novel is based on, it made me curious about picking it up in the near future. I had a similar —yet not as good— experience with this one.

However, although I know I received an advanced copy, the unfinished illustrations made it quite difficult for me to follow the narrative thread. I should point out that they were colorless —and sometimes faceless— drafts and, there being so many characters, sometimes it was impossible to fathom who was speaking to whom. Again, I know this is an ARC, but reviewers should at least be able to distinguish one character from another, and I think they should have waited to have that aspect somewhat deducible before releasing it for review.

Moreover, I felt that the dialogue and overall text was overly simplified to make it a shorter and faster read, I felt there was much information and context missing.

I will definitely be reading the original Parable of the Sower, though, because, if I enjoyed most of the story in spite of all the above, I’m sure I will love the full version.


Thank you Netgalley and ABRAMS for the ARC in exchange for an honest review.

My review of the Kindred adaptation: https://www.goodreads.com/review/show/2832636556